The story of ‘Gangubai Kathiawadi’ is taken from famous author S Hussain Zaidi’s book ‘Mafia Queens of Mumbai’. It was said in this book that Gangubai Kathiawadi, who came from Kathiawar in Gujarat, ran a brothel in Kamathipura, Mumbai in the 1960s.

Gangubai’s real name was “Ganga Harjivandas Kathiawadi”. The story of reaching Kamathipura from Kathiawar is quite painful. dreams of becoming a heroine
Ganga was from a prosperous family from Kathiawar in Gujarat and the family wanted to make something out of her by reading and writing but ganga had no desire to study and from an early age her dream was to become a heroin.

It is told in the book that when she was 16, Ganga fell in love with Ramaniklal, her father’s accountant. Both of them fled to Mumbai and got married, but Ganga didn’t know that the one she trusted who left her house was the biggest betrayer in her life. 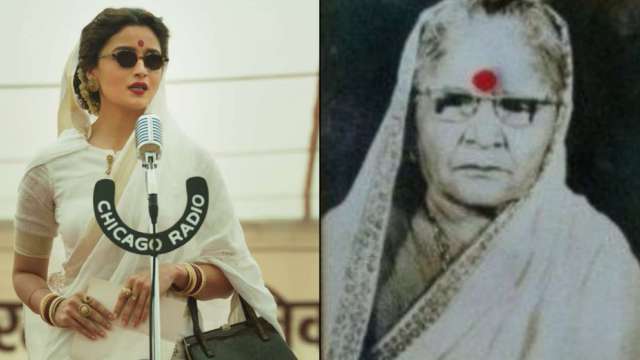 Harjivandas husband Kathiawadi sold her to a Kotha for only Rs 500. After that, the storm in Ganga’s life made her Kothewali Gangubai. Time taught ganga to fight with the situation and she gradually grew into a strong and fearless woman.

Gangubai has always raised her voice for the rights of sex workers in her time. Everything that happened to her shouldn’t happen to any other woman, so Gangubai didn’t keep anyone in her home without her consent.

Not only that, Gangubai had done a lot of work for sex workers and orphans in her life. Near Karim Lala
In Hussain Zaidi’s book, Gangubai Kathiawadi’s closeness to the don Karim Lala mafia is also mentioned. There was a notorious gift at that time.

One of the men who worked for Karim was also a con man named Shaukat Khan. Shaukat used to visit Gangubai’s kotha. It is said that he used to force Gangubai by going to a kotha and once his courage grew so much that due to Shaukat’s cruelty, Gangubai had to be admitted to the hospital.

Gangubai had also decided that she would respond to Shaukat. He went to Karim Lala and received his complaint and Shaukat was punished for his actions.

It is said that this speech by Karim Lala won the heart of Gangubai Kathiawadi and he made Karim his brother by tying a rakhi. By attaching a rakhi to the don, Gangu Bai became Karim Lala’s sister and Gangu became a rage in the region.

It is said that many people also recognized Gangu as Don. According to Hussain Zaidi’s book, Gangubai later joined the list of top female donors in Mumbai.

Philadelphia, Pennsylvania, February 16, 2022 — (PR.com) — NoBull Marketing today announced a newly released hour-long interview with Hayley Lisa – a licensed divorce coach for men who has dedicated her career to helping men find balance, peace, hope and direction through their emotionally charged divorces while emerging stronger on the other side. “My passion […]

Life Story: A Leader in Helping People with Disabilities in Christchurch Find Jobs

OBITUARY: Kevin Blogg admitted that he spent the first part of his life in Christchurch – he estimated that he had worked 40 different jobs in the first 20 years of his working life. But he also recognized that such an itinerant career path put him in a good position for the direction in which […]

The life and death story of Larry King’s ex-wife ▷ Tuko.co.ke

Even though iconic broadcaster Larry King passed away at the age of 87 on January 23, 2021, his memory lives on as he is the embodiment of the civilian interviewer. Throughout his life and his celebrated career, he was married to seven women. One of his wives is Alene Akins. She was Larry’s third wife, […]