Elizabeth Taylor: The Life Story You May Not Know

The myth surrounding Elizabeth Taylor has long been larger than life. There has always been something about her that has captured the cultural imagination, in life and in death. Her legendary purple eyes, penchant for priceless jewelry, eight marriages, and the sometimes volatile and scandalous nature of her relationships have all coalesced to form Taylor’s public image, making her highly visible and, at the same time, unknowable. Taylor’s stardom redefined the cultural idea of ​​what stardom meant, pioneering our modern understandings of the word: with paparazzi, publicly scrutinized and adored relationships, addiction struggles, and the use of her platform for activism.

Perhaps one of Taylor’s most notable legacies was her ability to understand her own influence and, to some extent, shape her own narrative at a time when major Hollywood studios were notorious for micromanaging actresses’ every move. To commemorate Taylor’s remarkable life — and to separate fact from fabrication — Stacker has compiled a list of 15 significant moments and relationships in Taylor’s life through interviews, biographies, and news stories. 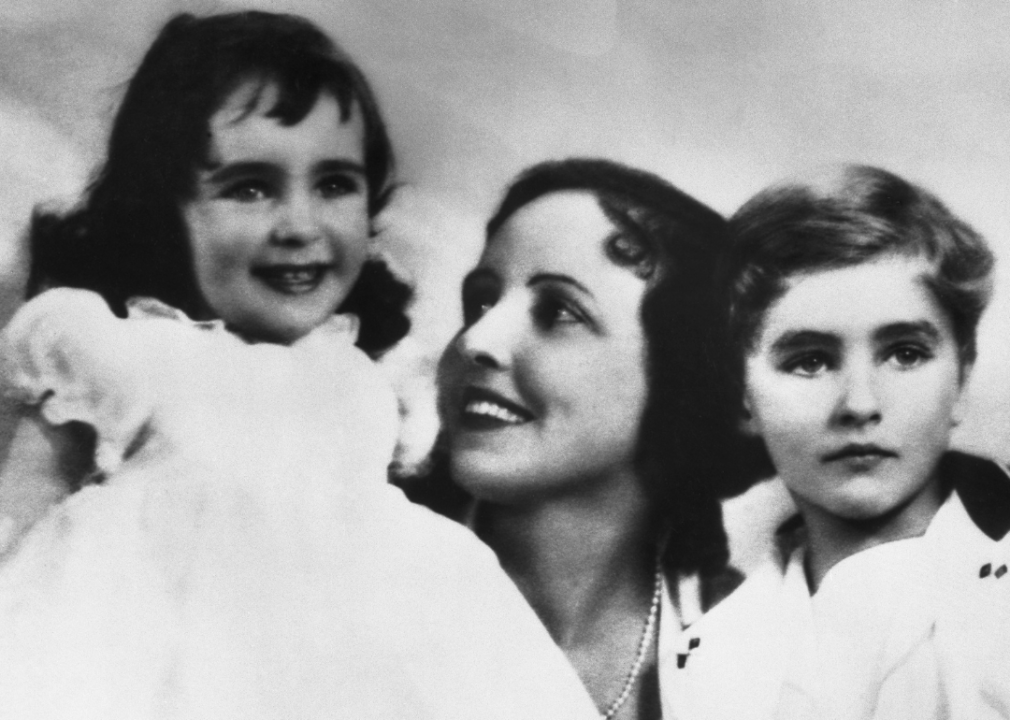 Elizabeth Taylor was born on February 27, 1932 in North London. Her parents were both from the United States and were no strangers to the world of art and theater. her father, Francis, was an art dealer and her mother, Sara, a former stage actress. She was raised as a Christian Scientist and did ballet from the time she could walk. A few months before the outbreak of World War II, the family packed up and moved to Los Angeles. 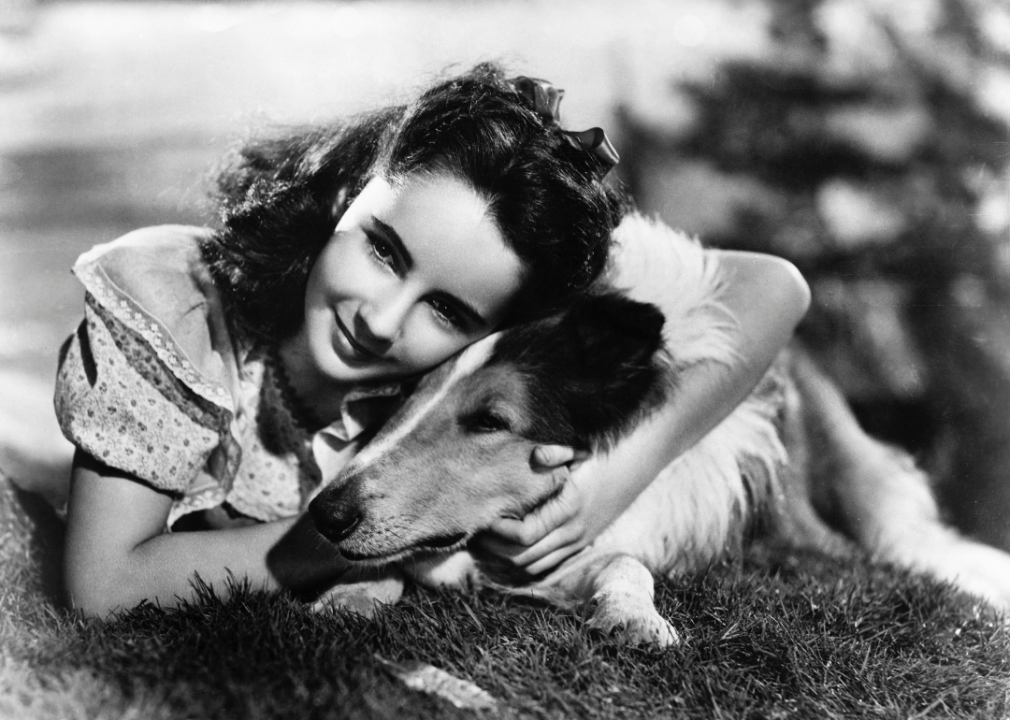 When the Taylor family arrived in Los Angeles, Elizabeth’s father opened an art gallery, which became a favorite of film industry personnel. It was there that she was discovered, making her screen debut in 1942’s “There’s One Born Every Minute” at the age of 10. In 1943, Taylor signed a contract with MGM, directing several more films over the next few years. When she was 16 or 17, Howard Hughes – who was 44 at the time – used his attorney to try to bribe Taylor’s mother $1 million to marry her, which Taylor reportedly found comical. 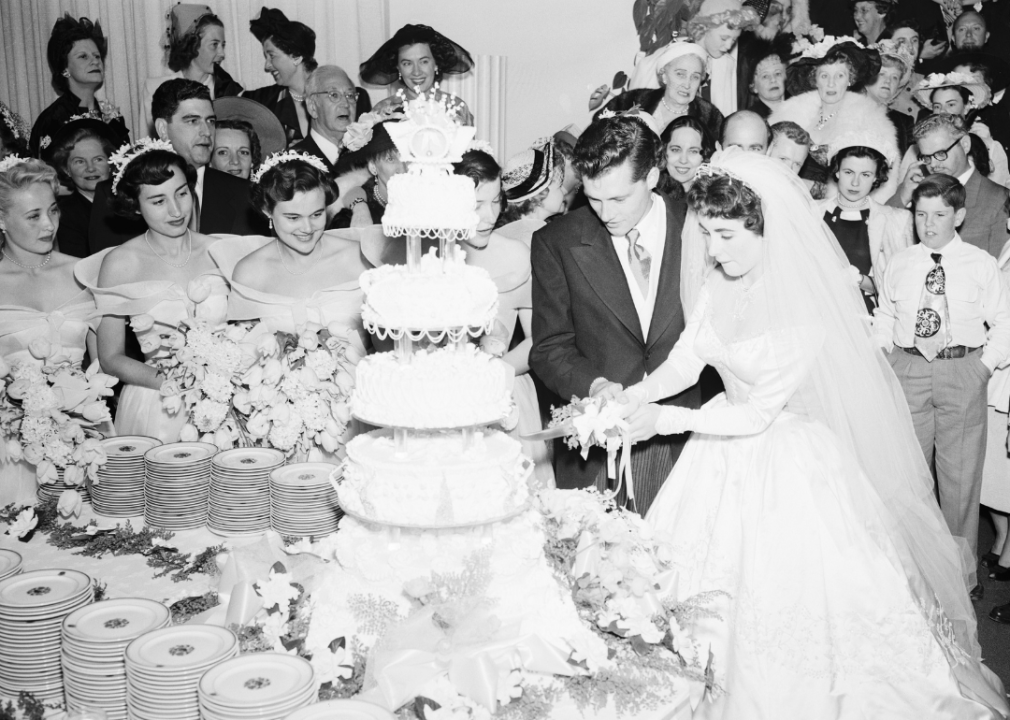 Taylor met Conrad “Nicky” Hilton Jr. – son of Hilton hotel magnate Conrad Hilton and future great-uncle of Paris Hilton – at age 17 at a nightclub in Los Angeles; they married less than a year later. The wedding was paid for by MGM, which was eager to use the event to advertise its upcoming film, “Father of the Bride.” Taylor divorced Hilton several months later, citing his alcoholism, gambling and abusive behavior. 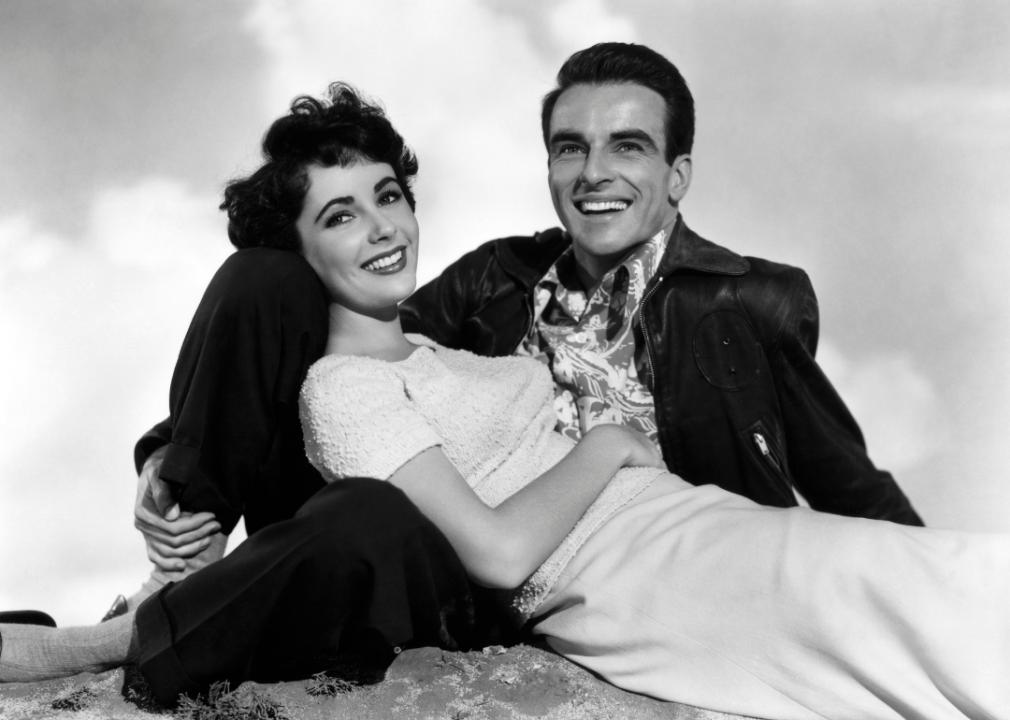 On the set of “A Place in the Sun,” Taylor met Montgomery Clift, whom she was cast opposite. Clift and Taylor became best friends, a relationship that would last until her death in 1966. In 1956, while filming “Raintree County,” for which Taylor received a Best Actress Oscar nomination, Clift left Taylor’s house after a party and got in a serious car accident. Taylor rushed to the scene and arrived in time to pull Clift’s dislodged teeth from his throat, saving him from choking. He never recovered from the accident, despite having plastic surgery, and developed substance abuse issues from constant pain. His slow decline and death have been called “Hollywood’s longest-running suicide”. 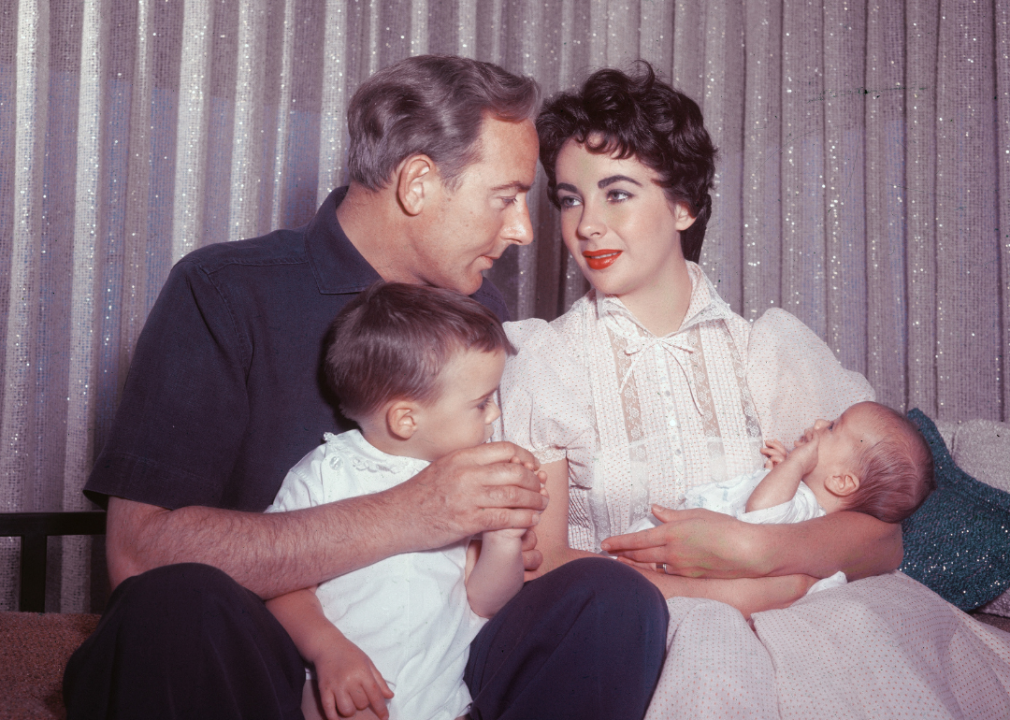 Taylor met British actor Michael Wilding on the set of “Ivanhoe” and proposed to him. He was 20 years her senior. They were married for five years and had two sons, Michael (b. 1953) and Christopher (b. 1955), both from caesarean sections. Eventually, their age gap and the different stages of their careers began to weigh on the marriage. They separated amicably in 1956 and officially divorced in 1957. 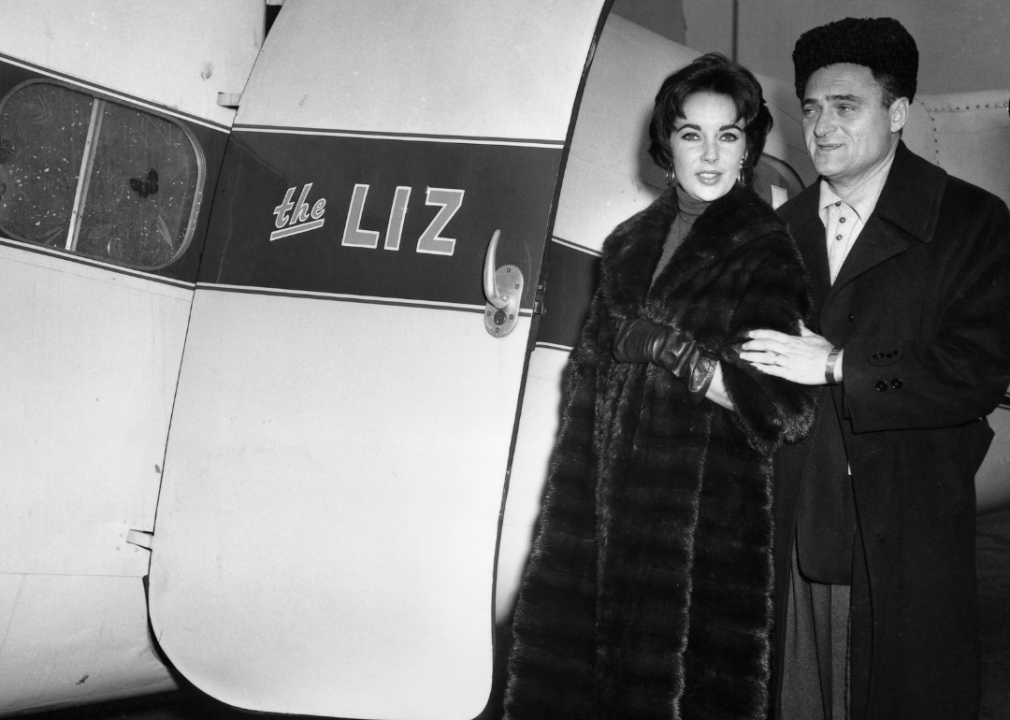 In 1957, Taylor married Mike Todd, a film producer 23 years her senior, in Mexico. They had a daughter, Liza, also born by caesarean section. Tragically, Todd died in a plane crash in 1958 just a year after their marriage, while on board his private plane named “The Lucky Liz”. After Todd’s death, Taylor converted to Judaism to honor her late husband, who was Jewish. Later, Taylor said Todd was one of the “three true loves of her life”, along with her future husband, Richard Burton, and her jewelry. 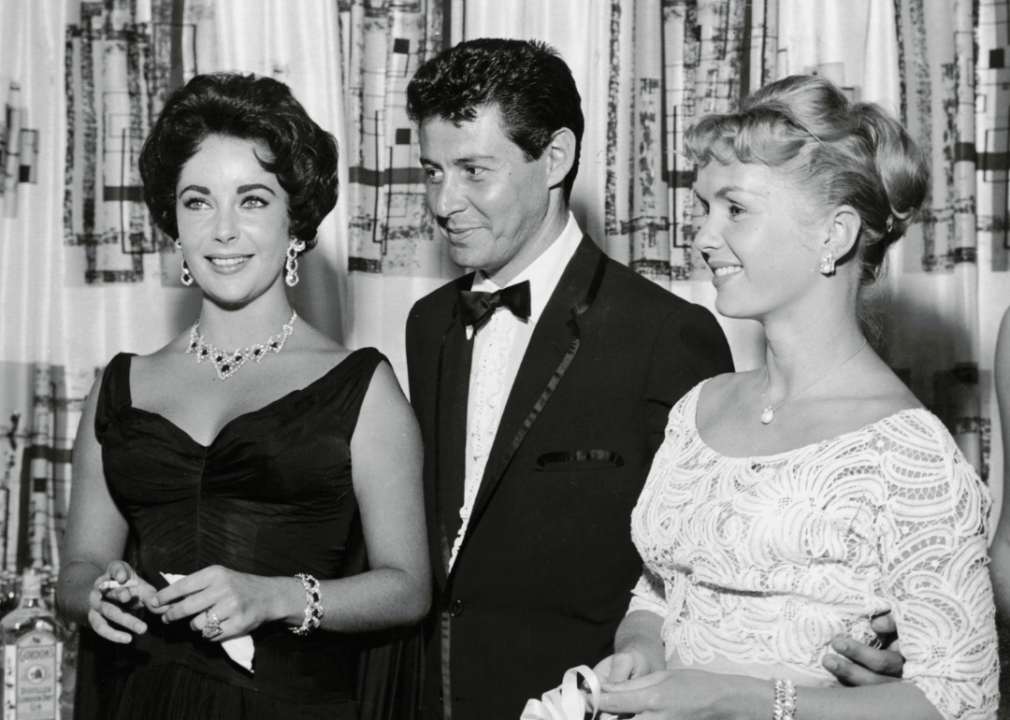 After completing filming of “Cat on a Hot Tin Roof” in 1959 (for which she received an Oscar), which had been interrupted by the death of Mike Todd and the withdrawal of Taylor for several months, Taylor married Eddie Fisher , who had been Todd’s best friend. and witness to their marriage two years before. To complicate the situation, Fisher ditched his wife, Debbie Reynolds, who was Taylor’s best friend and had served as his matron of honor at the Todd-Taylor wedding, to be with Taylor. Despite the ensuing media scandal, Taylor and Reynolds rekindled their friendship in 1966. 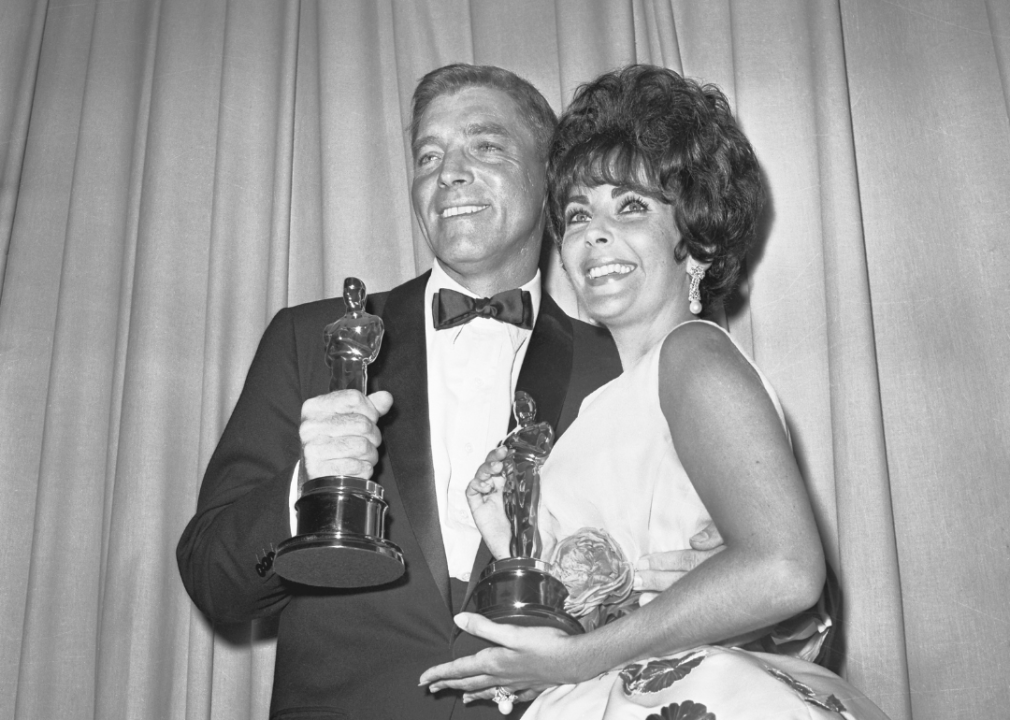 Taylor won her first Best Actress Oscar for the 1961 film “BUTterfield 8,” in which she starred opposite her husband, Eddie Fisher. It was while working on “Suddenly, last summer” that she was offered the emblematic role of Cleopatra. She jokingly asked for $1 million for the job, and 20th Century Fox agreed, making her the highest-paid performer in Hollywood history at the time. 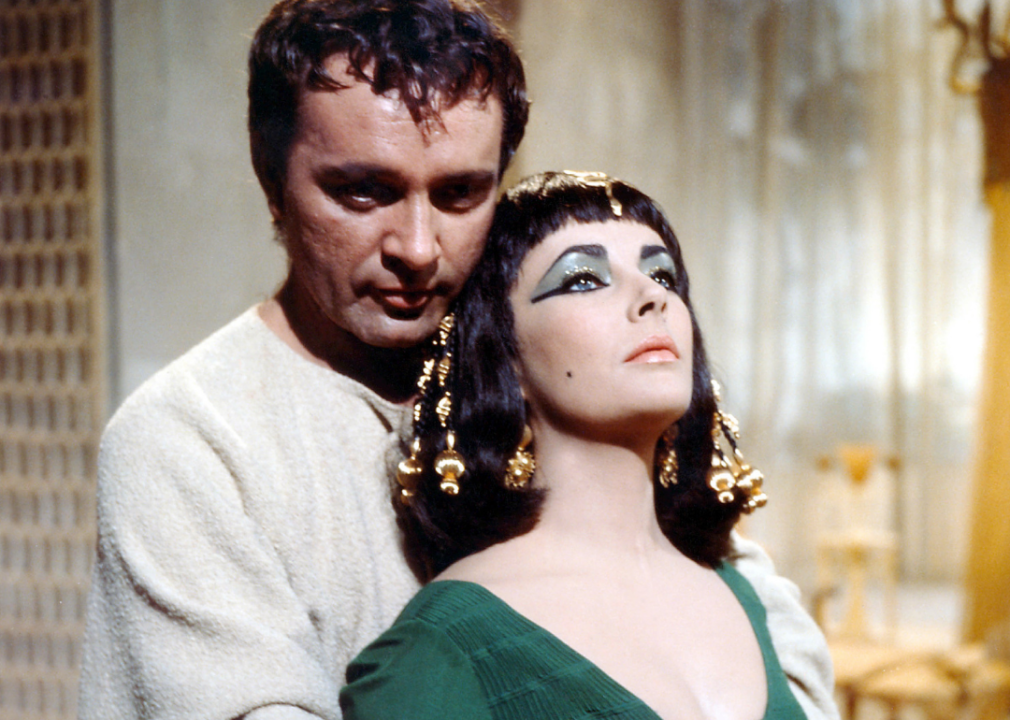 After Taylor suffered a series of illnesses, delaying the start of “Cleopatra”, production was moved to Rome and the main male actors were recast, with Rex Harrison and Richard Burton as Julius Caesar and Mark Antony, respectively. Almost immediately, Burton and Taylor fell in love with each other, despite both being married at the time of filming. Their affair caused a huge scandal across the world and eventually ended with their former spouses divorcing in order to get married in 1964. 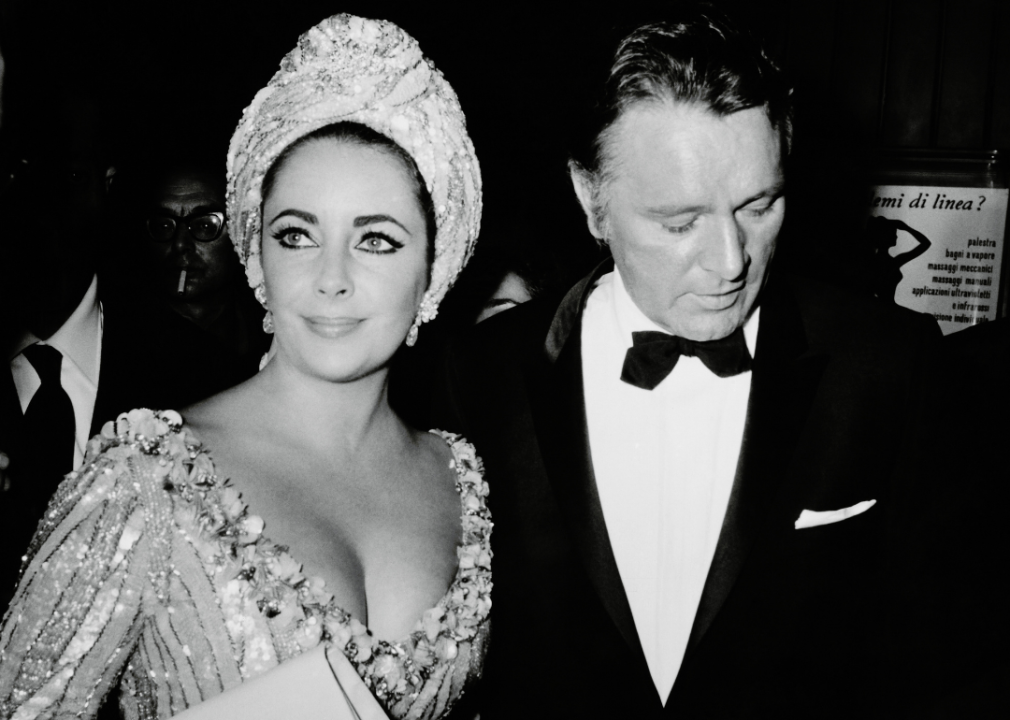 Taylor and Richard Burton were married for 10 years, but their marriage was as outrageous and scrutinized as their affair. Known publicly as the “Battling Burtons” for the intensity of their fighting, they routinely broke furniture, yelled at each other and even took physical beatings. Their extravagant lifestyle was also a frequent source of media speculation, with Burton buying Taylor millions of dollars worth of jewelry, expensive artwork, a private yacht and plane, and several homes. After divorcing in 1974, they remarried and divorced again within a year. Despite the uproar, Taylor said that after Burton’s death in 1984, she always expected them to be together again. 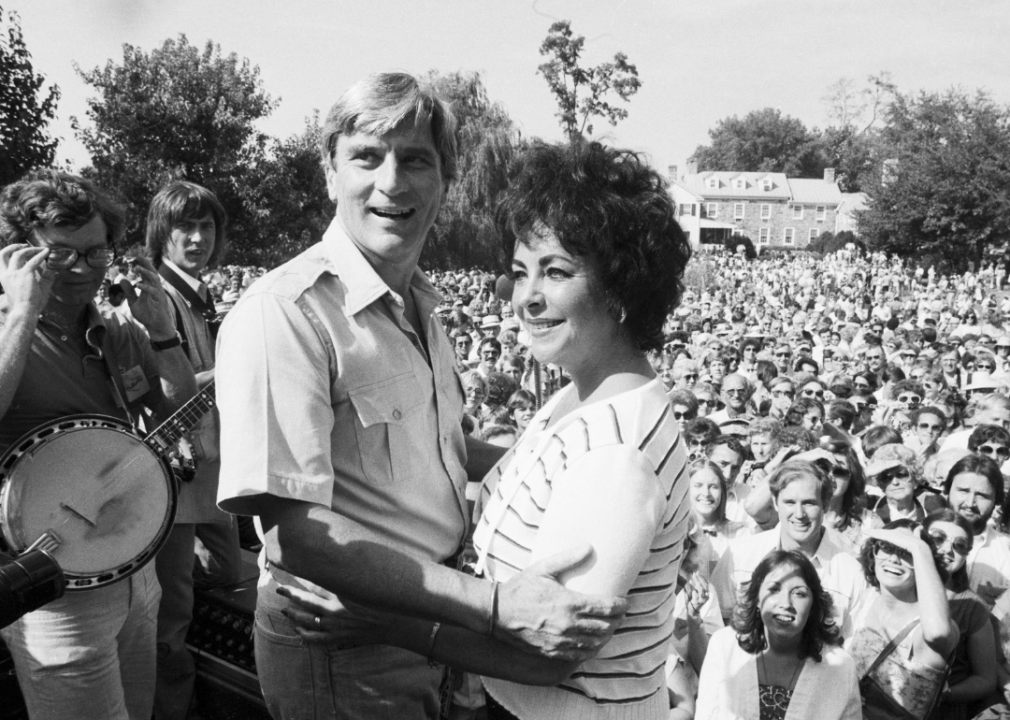 After meeting and marrying former Secretary of the Navy John Warner in 1976, Taylor stepped back and worked hard on her husband’s Senate campaign. After a busy decade of movies – after winning another Best Actress Oscar in 1967 for her role in ‘Who’s Afraid of Virginia Woolf?’ – his emotionally draining relationship with Burton, health issues and heavy drinking, and the adoption of another child willing to take a break. But this break did not last long. Warner was elected to the Senate in 1979 and Taylor, bored with life as a senator’s wife, decided to return to acting and divorced Warner in 1982. After the divorce, she sought treatment for her addiction to drugs and alcohol. It was while at the drug and alcohol rehabilitation center that Taylor met her seventh and final husband, Larry Fortensky, a construction worker who was also seeking treatment at the center. They married in 1991 at the Neverland Ranch owned by Michael Jackson, with whom Taylor had formed a close friendship. After five years, Taylor and Fortensky divorced, with Fortensky citing the stress of being in the spotlight. By the early ’90s, Taylor had mostly retired from acting. 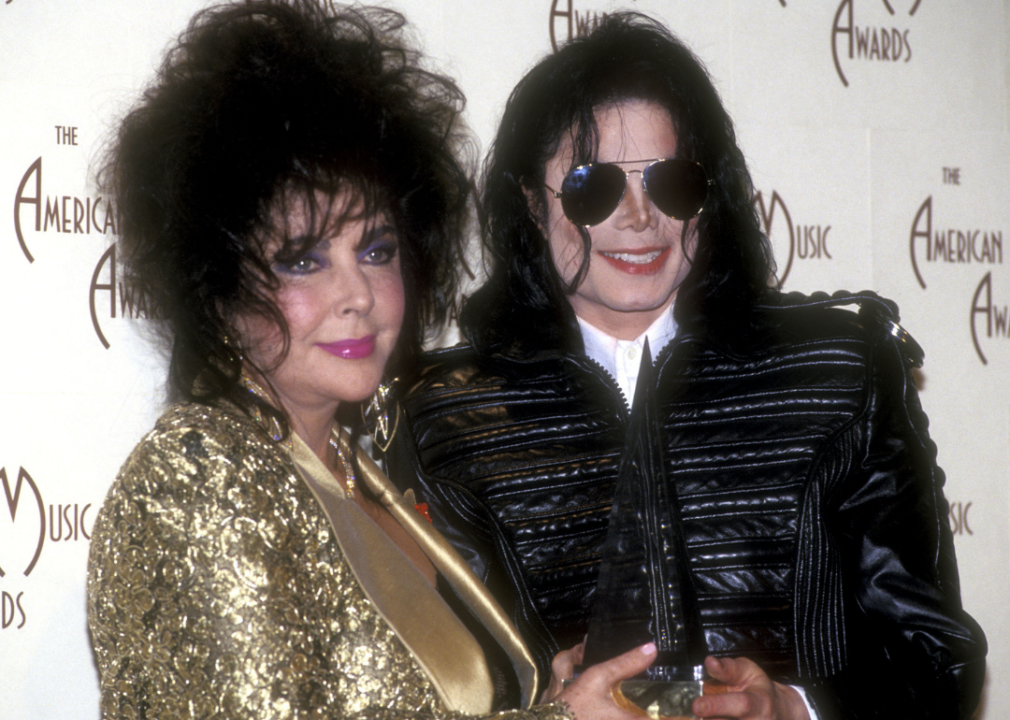 After Richard Burton’s death in 1984, Taylor met Michael Jackson when he offered him tickets for his tour. They quickly became very close friends, a relationship that persisted after accusations involving Jackson of sexually abusing a child began to surface. Taylor was a strong supporter of his in 2005 when Jackson was tried in court and ultimately acquitted of the charges. 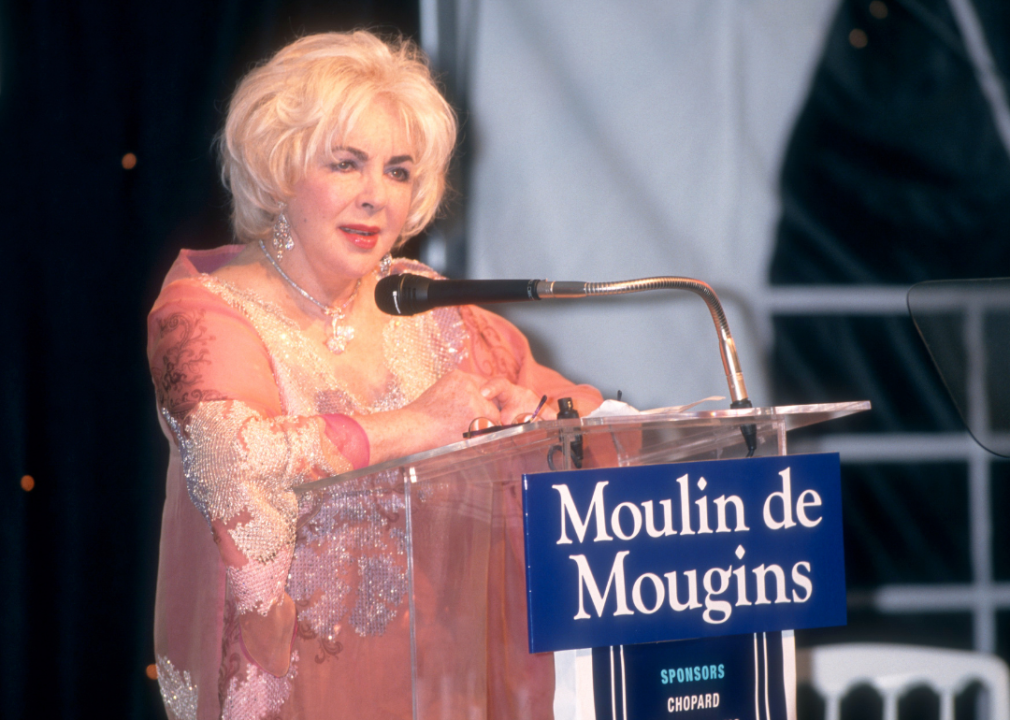 In 1985, Taylor co-founded the American Foundation for AIDS Research with several physicians from the Centers for Disease Control and Prevention, merging the AIDS Medical Foundation with the National AIDS Research Foundation. She is believed to have become involved in AIDS research after her close friend, Rock Hudson, died of AIDS in 1985. In 1987 she was awarded the French Legion of Honor and six years later , received the award from the American Film Institute. Life Achievement Award. In 2000, she became a lady. 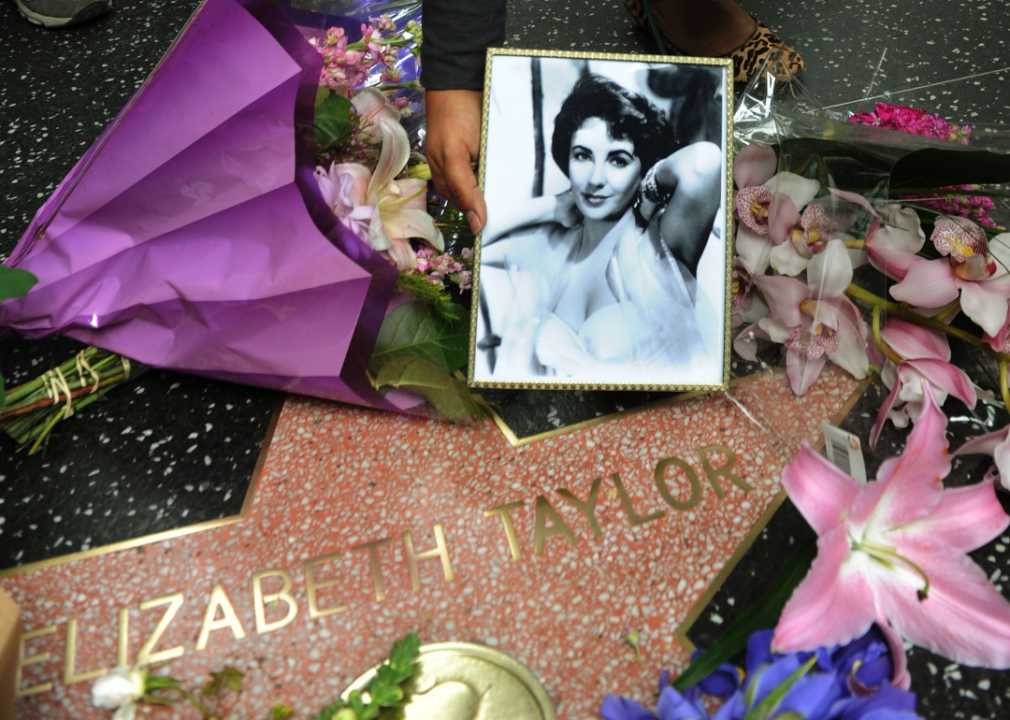 Taylor has survived an extraordinary number of health issues over the years. Among them was a stroke that led to surgical removal of a brain tumor in 1997, radiotherapy for skin cancer in 2002 and spinal surgery in 2004 to treat seven broken bones. spinal compression. Finally, after being diagnosed with congestive heart failure seven years prior, Taylor died of it at the age of 79. Taylor was buried at Forest Lawn Memorial Park just outside of Los Angeles, in a plot close to that of Michael Jackson.

Murder, bling and Lady Gaga: the real story behind House of Gucci

Bold, beautiful to look at and bursting with star power, House of Gucci brings to the big screen the remarkable story of the feuding family behind the Italian fashion label. Starring Lady Gaga as the ambitious outsider who married into the family only to see her spouse killed, the film, due out next Thursday (November […]

She learned that her life story would finally become a movie. Cue the excitement and fear

MINNEAPOLIS — Tales of Hollywood’s ups and downs are no better than this: “Flag Day” tells the story of Jennifer Vogel’s life and there would be no way she could exist without her. Even so, she was edited out of the movie. Based on the memoir of the Minneapolis writer, “Flim-Flam Man: The True Story […]